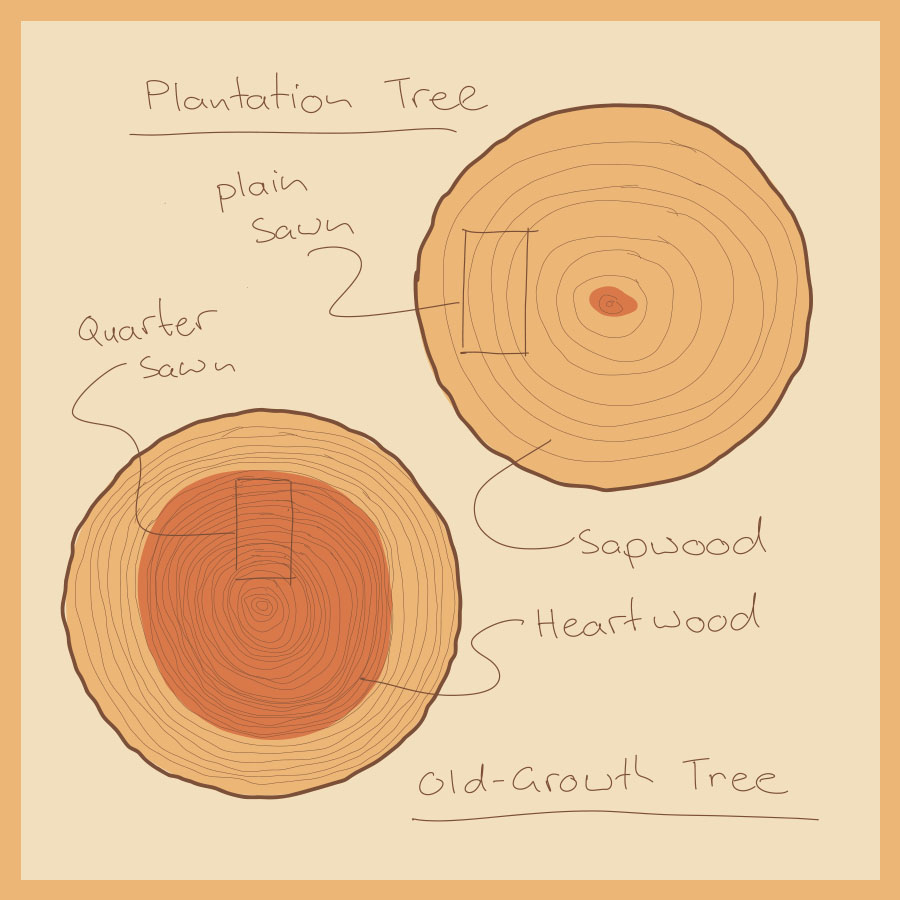 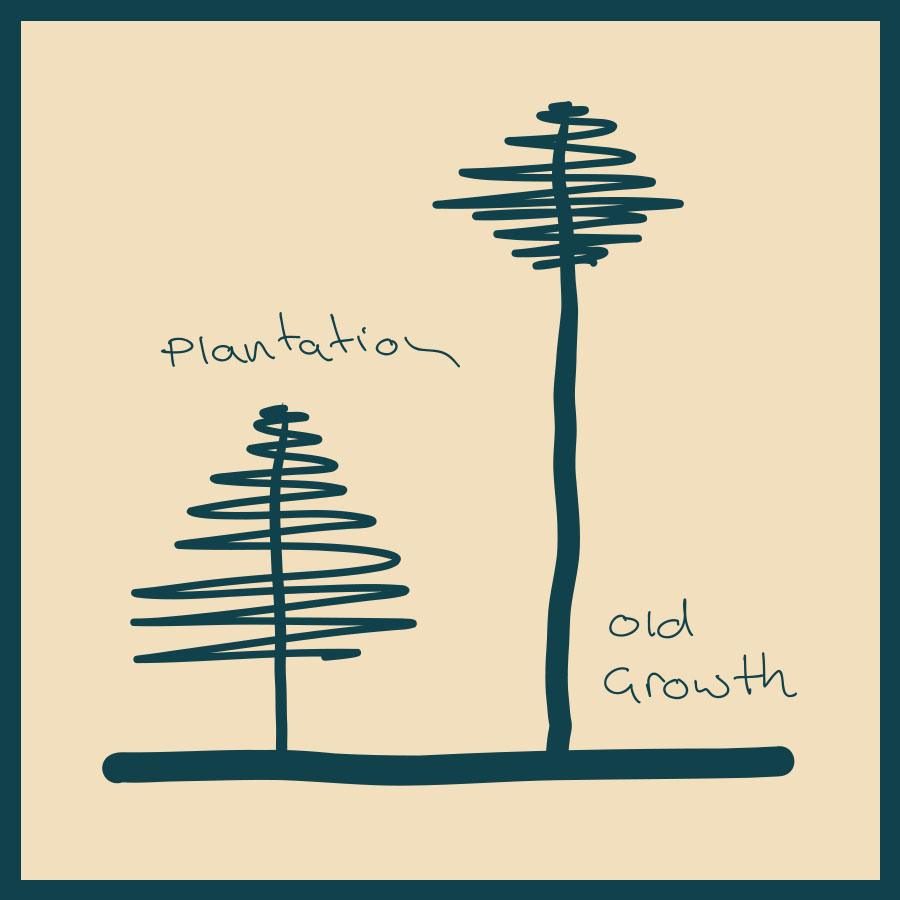 There is no doubt that New Zealand has a strong light timber framing tradition. As soon as sawmills were established here, this method became the default residential building technique.

Initially, the high quality, old-growth trees from virgin native forests were used and the timber was mostly untreated. These trees were more durable than modern conventional framing and old-growth trees are also far superior to plantation timber in terms of stability. In an old-growth forest, trees grow very slowly as the sun lower down is limited by the canopy above. Over time, young trees extend up as trunks and then branch out at the top once they reach the sun. This leads to “clear” timber i.e. trunks without many branches and timber without many knots. It also leads to tight growth rings which increases stability. On the other hand, plantation forest trees are all planted at the same time so they receive full sun from day one. They grown quickly due to this, with widely spaced growth rings and branches sprouting from the base like a Christmas tree!

Virgin native timber was used to frame and finish our local villas, bungalows, art deco houses, as well as the early state houses. By the 1920’s, people realised that we would eventually deplete these native forrest resources and the first radiata pine forests were planted. By the early 1950’s, boric treated, pinus radiata had essentially replaced native framing timbers. Going forward from this time, native timbers were typically only used for interior finishing applications rather than the structural bones of our homes.

Radiata pine was chosen as our dominant plantation timber due to economics. It originates from southern California and northern Mexico where it is often called Monterey pine. It is a fast-growing, softwood / conifer and it can be harvested three times a century when grown in this country. Although it grows fast and provides a good financial return, it is decidedly non-durable when used as a construction timber. Historically, in New Zealand, carpenters worked with it in its green / wet state and it was boric treated when used internally, to stop the borer eating it. When used externally, it was commonly treated with Copper Chrome Arsenic (CCA). Later, in around the 1980s, the timber was kiln-dried to a high temperature rather than used wet. It was found that this process offered resistance to borer, as these insects prefer moist timber. The authorities then decided that high temperature kiln-dried radiata framing can be used internally, untreated, on the 11 September 1995, with the publication of NZS 3602:1995. It was not know that the boron treatment also offered resistance to fungal decay and mould as well as insect attack. This along with new poor design practices / materials and the introduction of insulation into wall cavities (which reduced drying due to less ventilation), led to the leaky building fiasco. It wasn’t until the 1st April 2004 that the authorities reversed this decision and mandated the use of H1.2 boron-treated treated radiata pine & Douglas fir timber framing for interior use.

It should be noted that “old man” radiata pine is slightly more durable than plantation radiata pine. This is because it has grown for longer and will have a proportion of heartwood in the centre of the tree. The heartwood of a tree is the structural core and the sapwood is around the perimeter. The sapwood contains all the nutrients to feed the tree that insects etc also like to eat. The sapwood of all tree species is non-durable and needs to be treated for construction use. The older the tree, the greater the amount of heartwood and plantation radiata pine has virtually no heartwood, as it is typically harvested too early.

There are also new acetylation treatments for radiata pine that are durable, stable and supposedly non-toxic. This process essentially pickles the timber in a strong vinegar. The brand name for this wood is Accoya and the treatment is performed on NZ grown radiata pine treated in the Netherlands. It is a class 1 durable timber that is warranted for 50 years externally above the ground.

The second largest plantation timber grown in NZ is Douglas fir, which is also a softwood / conifer from Western North America. It is often called Oregon pine. It is slightly more durable and arguably stronger than locally grown radiata pine. It can be used untreated for enclosed framing if your house conforms to the low-risk design requirement of the New Zealand building code. In this case you will be wanting to use heart grade Douglas fir as the sapwood of all species is non-durable as mentioned. It is rather hard to meet all the requirements to be allowed to use untreated heart grade Douglas fir however.

Normally, if people are wanting to use untreated enclosed framing, they turn to locally grown heart cypress. There are quite a few cypress trees grown in NZ such as Macrocarpa and Lawson cypress for example. The heartwood of these species is considered durable when out of the ground, well in excess of H1.2 (pink) radiata pine or Douglas fir. They are also easily specified in accordance with the local timber framing standard, NZS 3604:2011. They can be visually graded as SG6 / No1. structural grade framing and sized in accordance with the charts in this standard.

Although you pay a premium for this timber compared to radiata pine or Douglas fir, I highly recommend it for owner builders. Owner builders often progress slowly and it is not good practice to have H1.2 radiata pine or Douglas fir framing exposed to the weather for extended periods of time. The treatment is water soluble and it will leach out in the rain. You may also want to consider heart cypress framing for low density, natural wall infill techniques such as light earth or hempcrete. With these techniques the wall takes some time to dry out and during this time the timber framing will be exposed to moisture for a period.

Another option is to use locally grown heart eucalyptus framing. Eucalyptus are hardwood trees originally from Australia, they are often called gum trees. For post and beam construction, old eucalyptus utility poles are often used. Many gum species are more durable than the cypresses for example and you can find class 2 durable examples growing in NZ. If you are talking old utility poles, they will often be class 1 durable and you may even be lucky enough to find a class 1 tree growing here that is suitable. For peace of mind however, I would still keep this timber out of the ground.

To reduce the cost of cypress, gum or other better quality timbers, you may be able to find someone with a portable sawmill to fell and cut some local trees for you. Ideally you would be able to store the timber for quite some time to allow it to properly season / dry. The rule of thumb for a hardwood is to allow 1 year for it to air dry per 25 mm of thickness. Softwoods can take considerably less time. Stack the freshly cut boards on fillets with gaps between each board to allow for air circulation. Seal each board at the two ends with wax and cover the stack to protect it from the rain and sun. You also want to weigh the stack down.

Alternatively, if you don’t have the time to spare to season the timber, you could frame with green lumber and as mentioned this is what was done historically. You will just want to be aware that studs warping, screws / nails popping out and members twisting out of plane, bowing, cupping and distorting may be an issue. You will also need to to ensure the timber is more durable and that the structure is highly breathable / open the the air. This is to allow the moisture in the lumber to escape without causing any damage as the wood dries in place. If you think back to the early days in NZ when carpenters did frame with green lumber, structural cavities had no insulation whilst walls often had scrim and sarking and weatherboard coverings. This type of construction allowed for free air movement whilst the timber dried. NZS 3604 also has special structural requirements that must be adhered to i.e. “timber may be installed green provided non-vertical members are propped and are not subjected to design loadings until they are dry”. These issues are all workable, they just require a bit more time and care. On the plus side, green hardwoods are easier to cut and will wear less on your tools when wet as timber gets harder as it dries.

Finally, no discussion on timber framing is complete without mentioning pegged mortised and tenon joinery. This is the original timber framing method from Europe and it is a beautiful art form that traditionally used green oak. In this system, the joints got stronger as the timber dried over quite a few years after the frames were erected. It never formed a part of the regular kiwi builders skillset but it is occasionally done here, normally using heart cypress, for very special dwellings or more commonly as a feature heavy truss or two.